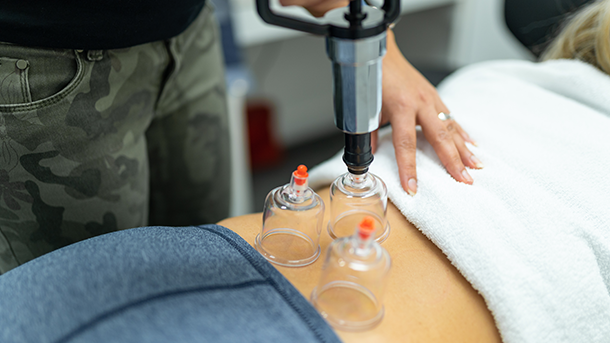 WHAT IS CUPPING AND ITS HISTORY

Cupping is a holistic therapy that has been in use by various civilizations ranging from ancient Egyptians and Chinese to the Roman Empire. The treatment was utilized to relieve multiple conditions in the past, such as hypertension and various chronic diseases. In the modern world, cupping is primarily used as an adjunct to rehabilitation services and has been widely used for those suffering from chronic pain and muscle soreness. Moreover, the technique has been incorporated into rehabilitation for professional athletes at all levels, including in the Olympics.

HOW DOES CUPPING WORK

Cupping works by applying cups around areas of interest, utilizing heat to create negative pressure, and suctioning blood into the area of interest. It’s similar to massage therapy and mimics many of its abilities to access deep tissue and myofascial release. Unfortunately, cupping leaves bruise-like marks on the suction area due to small bursts in the blood vessels.

WHAT ARE THE BENEFITS OF CUPPING

WHAT CONDITIONS CAN
BENEFIT FROM CUPPING